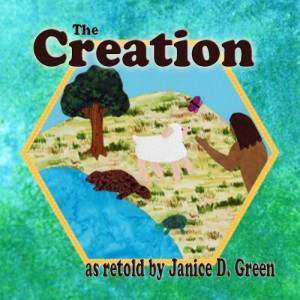 Today, Janice D. Green is our guest blogger. Janice recently wrote a children’s book on creation called THE CREATION. Leave a comment on this blog post for a chance to win a free copy.

What difference does it make if God created the earth or not? Why should we care?

A man named Charles Darwin published his theory of evolution in 1859, and scientists began to buy into his theory so that today it is taught as fact in many schools. People who bought into this theory were emboldened by it to believe and convince others that there is no God, and that the Genesis account of creation is simply the accumulation of fireside tales.

I would like to challenge these people’s thinking. There is too much logic and scientific thought embedded in the Genesis account to believe that cave men sat around campfires and thought it up. Even up to the day of Columbus people thought the world was flat and the sun moved around the earth.

Let us consider the sequence of the Genesis account:

Pre-day 1: God created the heavens and the earth. Though it was without form it included the waters and the substance that became the land. (I have separated this from the first day only to emphasize an often overlooked part of creation. In the Jewish tradition a day begins at sundown making this a part of the first day.)

Day 1: God created light and defined it as day. He separated the light from the darkness and called the darkness night. This marks the beginning of measurable time as we know it.

Day 2: God separated the waters and made our sky (atmosphere). All life must breathe and must have water.

Day 3: God brought the land up out of the waters and created vegetation with seeds. Only plants can create energy from light, water, and minerals from the soil. Plants are the most basic ingredient in the food chain. Without them animals could not exist.

Day 4: God created the sun, moon and heavenly bodies. This is essential to the creation of seasons that are necessary for maintaining the plants. People tolerate and/or enjoy seasons, but plants are dependent on them.

Day 5: God created the birds and the sea creatures.

Day 7: Then God rested for one day setting an example for us to follow.

Consider the beauty and the intricate design that we see in all of nature. From the grandest planets, mountains, and sunsets to the tiniest flower, butterfly wing, and grain of pollen under a microscope there is beauty and order that defies the idea that it all happened by chance. Romans 1:20 tells us, “For since the creation of the world God’s invisible qualities—his eternal power and divine nature—have been clearly seen, being understood from what has been made, so that men are without excuse.” (NIV)

Scientists have not disproved God. To do that they would have had to have gone to everyplace that exists with instruments capable of detecting him. Scientists can only declare what they do not know about God.

When God placed Adam and Eve in the Garden of Eden he gave them the opportunity to choose to follow his plan or to go their own way. They chose the path of disobedience. We are given the same chance. To choose to believe in the Creator or to live in rebellion going our own way.

If we choose to acknowledge that we are made in God’s image, we will value ourselves and serve God and mankind. If we believe we are accidents with no plan, we see ourselves as animals with limited value for ourselves or others.

All eternal matters boil down to choices we make based on our relationship to the One True Living God.

2 thoughts on “Why Does the Genesis Account of Creation Matter?”